There are different types of narcissistic behaviours, depending on the person’s personality type disorder. Here are some of the major characteristics, described in short:

The narcissistic drama queen uses a more dramatic approach to create a Hollywood style of suffering, intended to attract as much sympathy as possible. They will use any type of tragedy to put themselves into the forefront, making it look as if it was for a real cause. The bully narcissist, also known as the sociopath, acts out its erratic confrontational approach through direct verbal and physical threats and abuse, using that as the most powerful tool for suppression and fear production, to the point where people are afraid to freely speak or even dare to be their true selves. The paranoid type suspects betrayal behind every action, wrongly perceived to be directed at the self from an overload of suspicion, which in actual fact is a mistrust towards the self. In this case. Distinguishing confusing false conspiracies from actual facts becomes a real challenge. The passive/aggressive type operates with hidden strategies, much harder to be backtracked, especially because they use false-projection tactics in order to distract from their damaging actions (this is in actual fact a method applied by all narcissistic types). Whilst everybody is now focused on the wrongly accused, they can cause more harm, unhindered. The few that can see clearly what is happening are often dismissed, precious time is wasted, during which false promises are made, never meant to come to fruition. Anything is done to give the ego what it needs: followers, praise, admiration.

There are narcissistic types who possess one of the aforementioned trades, others have a combination of them.

It is important to understand the Enneagram in order to clearly see the difference between a person’s true spirit in comparison to the ego self. One side of the spectrum represents the true brilliance in each and every one of us; a kaleidoscope of different personality types, merged with the wisdom of the spirit, acting selflessly from its purpose to be of service, the other indicates a falling away from this natural radiance into an all self-absorbed, destructive ego driven construct of a false identity. When in a healthy state of true identity we work together harmoniously, balancing each other out. A person unable to address underlying issues for a variety of reasons, will begin to disconnect from its love connection to the Higher Self and begin to shift into an unhealthy state of non-spirituality, replaced by a fabrication of an ego identity. Over time the ego self shapes itself into the person’s original healthy behavioural model, suppressing more and more its true identity by tricking the mind to believe it is the ‘real deal’. An overload of ego is always an illusion, a cover up of the true self. It clouds the wholeness of the divine within a human through a disconnection to the divine source of love. In other words; leaving unfinished business undealt in the corners of the subconscious mind field, leads to the opposition of a person’s authenticity.

Endless possibilities are always given to dismantle an overload of an ego build up, if the person is willing to do so. This opens doors back into Oneness with the spirit self, expanding into the total sum of the original human spirit. Our home is who we really are; deep inner peace, harmony, happiness, togetherness, love. Source is a constant supplier to keep the vibration at its highest level, it is up to us whether we wish to connect with that or not. If we do, then any needs for demanding behaviours, control, disharmonisation, dismantling of a healthy state of consciousness, fall away. Stubbornly holding on to an over active ego self always leads to blocking our cells from their essential high frequency energy of love, leaving them in a toxic environment, contaminating the mind(s) to the point of complete personality disorder. 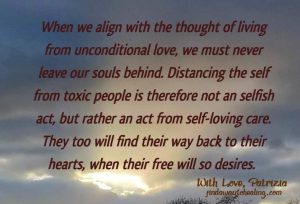 When exploring the personality disorder of a narcissist, it is done to raise full awareness of the crippling consequences this will lead to if left unaddressed; the ego pattern of a narcissist leaves trails of widespread destruction behind, causing conflict in every way possible. People can easily get caught up in the mind games of this kind of personality disorder; a narcissist knows how to wrap its prey or people around its finger to then attack or lash out when least expected, using a vocabulary of specifically selected harsh words and unpredictable actions to shock the victim into obedience. Confused from such unexpected attacks, the victim remains in a state of confusion. Here is where the mind game becomes obvious. Those who escaped narcissistic relationships take a while to heal but once they have freed themselves from the shackles, they can claim their souls back and choose from the gift of free will to finally do all they can to stand in their true divine power. 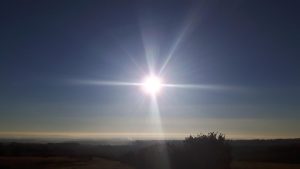 What drives a narcissist is the need for constant admiration for self-aggrandisement. Measures are put in place to have absolute control over everybody. Without these obligatory ties in place, the narcissist is unable to feed from people’s energy fields; obedience, obliviousness, sacrificing one’s power by blindly following the leader in a co-dependent state of false trust, turns into an oppressive blame game launched by the narcissist, whereby in the end nobody wins. Taking pleasure in people’s suffering builds up the ego type even more, giving it a false sense of self-importance. Building and maintaining walls of separation are always constructs of the ego mind. ‘Leaders’ who suggest and then have actual walls built, never come from an authentic place of bringing people together. Listening to lies, wrapped in dictatorship-like actions become the norm. Clearly this indicates a downward spiraling leadership, into a dark non-loving world, where hate and pointless hardship rule. 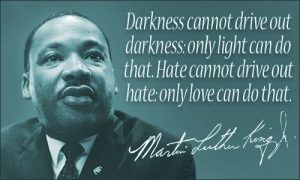 The time has come where humanity has to move out of this habitual low vibration state of human consciousness. Too many families, groups or communities are effected. The impact political narcissistic leaders have is dire for the economy, the world, the environment, communities, with devastating results, causing division between genders, races, the rich and poor, nations. Shockingly we can see that agonising painful separation between immigrant children and parents have become accepted, as well as betrayal against allies, extinction of animal species, poisoning and destruction of the planet; all of which is a direct result of dictatorial leadership. Denying humanity’s expression of free will in a democratic world is a dangerous endeavour.

In extreme cases the pompous appearance of some currently in leading positions can lead to civil unrest or world wars.

One of the major basic issues of a narcissistic behavioural disorder is absolute terror of loosing its grip of power abuse, coupled with a lack of self esteem, suppressed pain lashing out to the outside world. Playing God becomes their favourite game and in that the human spirit gets lost. Without the human spirit they can convince anybody that they are THE savior! In reality we have been warned for centuries about what is happening now; watch out for false prophets.

Political narcissists are perfect puppets for a very small percentage of highly destructive individuals, the 1 % of the super rich whose identity is not based on a lack of self esteem and terror but rather on a system of totalitarianism/ authoritarianism. They have moved beyond the need to play God and belief indeed that they are more powerful than God, based on the amount of control they have with immeasurable vast accumulations of wealth, possessions as well as collaborating with dark forces. Love is not on their agenda, instead it is the enslavement of the human race.

Here a definition of authoritarianism: it is characterized by highly concentrated and centralized power maintained by political repression and the exclusion of potential challengers. It uses political parties and mass organizations to mobilize people around the goals of the regime.

A pure unconditionally loving creator, who – by the way – does not create evil, we do, wishes for every single one of us a prosperous abundant life. All we have to do is use the gift of our own creative powers from love to keep transforming negative ego produced energy into positive outcomes, directly from our Higher Selves. The ego driven narcissistic leader does the exact opposite by keeping negative thought patterns alive, causing more toxicity. A loving God always grants us access to live in harmony with all of existence, firmly anchored in divine self empowerment. Hypocrites acting in disservice towards the human race are demanding, manipulative, void of any compassion with a strong need to control the masses against each other, initiators of war. A spider web of dark interconnections is sold to us as the only solution to peace. Why would we fall for such traps throughout centuries? There is only one force in charge of its own creation and that is the Source of infinite intelligence. Our spirits are woven into the divine law of Oneness, a place where ego will never succeed.