The most common question I was asked during my travels was why nobody in Germany did anything to stop Jewish people from being deported and gassed in concentration camps. My answer was always the same; the majority had been so thoroughly brainwashed by Hitler’s extensive propaganda machinery from the early 1920ies onwards, that it was easier to continue to buy into the lie – that concentration camps where just places of labour and nothing sinister – than question the reality of what went on. The kind of people who had a suspicion felt it was safer not to mention it and for those frontline soldiers returning home, it was highly dangerous to talk about what they had witnessed. Some secretly believed that the deported deserved to be in these camps and felt ‘Schadenfreude’ (sadistic joy about other people’s damage/misery). People living close to concentration camps were complaining about the smell of burning flesh, but other than that they convinced themselves that surely there must be a good explanation for that. Resistance fighters were humiliated, sentenced, and executed. Those who spoke up risked being arrested, imprisoned, or deported themselves.

Unfortunately the following link has no English subtitles, but the images speak for themselves

The bravest ones dared to hide the persecuted but by doing so were playing with their lives. Heroes, such as Schindler, cleverly found a way to safe thousands from being killed.

Most Germans had become used to the Fuehrer’s hate filled propaganda speeches and wanted to believe his promises to end the high percentage of unemployment by giving work to the many. His disgust towards the ‘culprits’ of the country’s misery, such as Jews, gypsies, and other “non-Arian parasites” to this date is so apparently appalling, that it makes one wonder how anybody could possibly fall for it again. To bring order and great economic growth into the country, ‘vermin’ (his words) had to be taken out of the system to breed the pure German race. To justify attacks against countries, the nation was told that the enemy was planning to attack them. The idea behind was to conquer one country after another to build an ever growing ‘Great German Empire’. The author of ‘My Kampf’ (My fight/battle; note it’s HIS fight) used typical dictatorship trickery to achieve totalitarian power; he would strictly deny to every political leader what they suspected – the start of WW2 – and trick them. He first took Austria back to the Reich (=empire), invaded parts of the Czech Republic and finally, with Poland’s invasion, started WW2.

The old traditional list of war justification nowadays is extended with further accusations, projected from the dictator and his puppeteers, onto the target; danger of biochemical weapons or those of mass destruction. Mr. Adolf did give jobs to the unemployed by letting them build motorways, years before the start of the war. This was necessary, to allow easy access and movement for tanks and other military vehicles. War preparations take many years to accomplish. It requires years of mind control, hate & lie distraction as well as normalisation of crime against humanity, by applying typical intense manipulative division tactics of mis-leadership. Consequently, war promotion represents the lowest form of consciousness and is therefore undeniably forever completely disconnected from the Source of all creation.

We all know today what happened to those deported and opposition leaders, who were executed. It is astounding to observe the fall of a previously tolerant society to the demands of a power obsessed man, controlled by the 1 %, ruled by his destructive conquer ego mind set, overpowered by a fascination of evil. These craters of division, propelled by unjustified fear, anger, hate and/or indifference must never be allowed to enter our mind sets again. Remember that a dictator always wants to force his mental instability onto us and by doing so destabilises the world.

We should have learnt from these repetitive history lessons of pointless battles and dehumanisation. None of this would work though if everybody decided to do their own reality checks (including research of historical facts), performed regular ego management, and understood that nobody who really desires a great wellbeing for the people would or could ever act aggressively by instigating an attack. None of it has ever worked, nor will it ever succeed. The culprit is the instigator and if nobody within the country supports that, it is doomed to fail. That’s a real huge success.

When the war was finally over, German people were faced with the reality of everything that had occurred, especially between 1939 – 1945. The resistant fighters, previously named, shamed, sentenced, and killed, were now the most respected heroes of all. Streets, schools, and other institutions were named after them. People who risked their lives by pointing out Hitler’s obvious propaganda, were admired and recognised for seeing through it all.  To show people the reality of what had happened in concentration camps, the allies took them on a tour through them!

The tables had turned and the ones who had turned a blind eye to the politics of dehumanisation were now ridiculed and humiliated. Hard core Nazis were either killed by the allies, committed suicide, stood trial at Nuremberg, or managed to escape to South America, until found by human rights organisations.

The biggest burden of the German people was the worldwide shame and stigma they carried for decades to come! It had sunk deeply into the country’s consciousness.

Right now, we are experiencing a repetition of the past, only on an even bigger scale. How we react and act towards it is crucial for our human evolution. It is essential to see through old rotten methods of oppression to face & clear it,  to overcome it with love and light. Every single one of us has agreed to wholeheartedly clear war consciousness. Thankfully, unlike 80 years ago, so many are standing up in unity, but more need to join the club of earthly reality, whilst remaining connected to the human spirit of solidarity. Evil cannot beat that intense light, it feeds off fear, division, indifference, and anger. This time we really can’t effort to fall for any kind of propaganda anymore, designed to turn us into powerless accomplices of oblivious obedience. We must release our souls from a dictator’s mindset to set ourselves free from slavery.

If we stand up and support the persecuted, we are standing up for ourselves, indeed we clear a highly toxic earthly consciousness, which will in the end benefit absolutely everybody. We must learn from our ancestors to never allow atrocities from centuries of historic repetition to relive themselves, but clear all those beliefs, based in the destruction of God’s creation. After all, we are God’s children and as such we must act from the power of love, for ourselves and for each other. 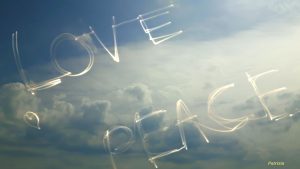