One very important aspect I learnt from my father, throughout life and especially during the time of his illness was his ability to immediately and completely accept reality as it is. He was obviously very shocked when doctors told him he had jaundice, his blood sugar was through the roof (over 300) and worried about what else they would find in the coming week. It didn’t take him long to get over that initial shock and the next day he had already gone into his usual energy of acceptance as to how the present reality was unfolding in a state of complete uncertainty.

Everybody took it differently; the combination of the variety of our energies participating in this experience somehow really helped. It felt like a support network. One thing was for sure, right from the start; we were all in this together. We shared the same intent; assist my dad as best as we could, we each played our part in this situation, with me taking on the role in finding the right treatment, a natural development.

In the first 3 days before we knew the diagnose was pancreatic cancer, it felt like somebody had literally taken the floor from underneath my feet; deep down I was very concerned, my gut or instinct knew that this was something very serious but my head was trying to convince me that it hopefully was nothing major to worry about and soon we would be told that everything was just a passing illness. On the 3rd day I was in town with my friend, discussing all possibilities what it could be, then – on my way home, my dad called to tell me that they found a malignant tumour. He was laughing whilst telling me, that was to lift the heaviness of the scary reality off my shoulders.

All the way home I just cried; to my surprise I couldn’t have cared less in showing vulnerability in front of all these people passing me by! As I was sobbing my one thought was to travel back to Germany and do all I could to assist my mum and dad in this dire situation. That gave me the strength to cope and a purpose, it gave me a sense of empowerment, there was no time for playing the victim. In fact, nobody in our family or anybody who supported us went into a victim hood state of mind, there was no time for that, it didn’t even cross our minds.  Today I know that one of the main reasons for the astounding healing results we were presented with 9 months later was by recognising the facts exactly as they were, in particular by my dad.  In the meantime I took action to support my dad as best as possible, whilst looking for a suitable treatment for him, showing appreciation to all consultants and medical staff involved, no matter whether they were stubborn conventional or holistically more open minded.

My brother Markus was helping enormously in opening up my mind to finally grasp the fact that our negative or traumatic experiences are the root cause for an illness, in this case cancer, no matter how long ago that could have been. Until that time in September 2004 I believed that nutrition and exercise, trying to have a joyful life, were sufficient to maintain a healthy body. Constant stress of course, I knew, was another factor. This is surely the case, we are alkaline beings and taking in too much acidic foods or drinks cause illness by effecting our immune system, as does stress. Yet I believed that once a painful situation was suppressed, it was gone . There is much more to that, I slowly began to understand and finally had to open my mind to the reality of other possibilities; the connection between old suppressed trauma and an illness.

In the weeks to come – as my dad was going through the required examinations – I was reading all I could about pancreatic cancer, the root causes, what anthroposophical hospitals had to offer, emailing their doctors, going through a variety of treatment options, printing out reports written by holistic doctors for my dad to read in hospital, looking into cancer boosting nutrients… the list was endless. I wanted to know exactly what we were dealing with, what to expect in the worst case scenario, listen to various opinions, whilst being discerning at the same time, allowing my dad to make his own choices. In all of that I knew instinctively one thing right from the start; we had to use a homeopathic treatment; it was the only powerful holistic treatment I knew at the time, which would treat the person in its individuality with its specific issues. No matter how much I tried to sometimes brush that possibility aside, it kept coming back into my consciousness. All the time we were weighing out options; we had to accept the entire situation presented to us and within that every single moment that brought along different doctors with different ideas with regards to the right treatment.

One highly recognised professor for pancreatic cancer for instance suggested a 4 week intense radio- and chemotherapy, after an unsuccessful Whipple op, to reduce the tumour and then operate again. Had we blindly followed that advice, my dad would not be alive today, as was later confirmed by another 3 x top consultant, also trained in Homeopathy. It would have weakened my dad’s immune system considerably, with a high risk the cancer returning with a vengeance.

Everybody has to feel what is right for them and if this would be the right option for somebody else going through the same, then this is what they should be trying, until they find that another treatment could work more efficiently.

In May 2005 a TV crew came to interview my dad for a scientific documentary on Homeopathy, it was the day before his next CT scan was due. Since he had left the hospital all he applied was a Homeopathic cancer treatment. To the crew’s surprise they found my dad climbing around the roof top of his loft conversion, alongside with carpenters and builders. He had decided to finish his projects before departing onto the other side! After an entire day of filming at some point my dad asked the director of the programme: “What will you do if my examination tomorrow shows that the cancer has spread. You can’t broadcast my case as an example, if it hasn’t worked”. The director replied ‘lets cross that bridge when we get to it’. Even then my dad remained totally realistic, bracing himself for what was going on right in that moment with its possible outcomes.

During those 9 months we were also faced with skeptical medical professionals who ridiculed my suggestion of using Homeopathy, alongside with a couple of people denying it was cancer. Once my dad was given the all clear, those same people were also the once denying it was cancer in the first place, unable to open their minds to the reality of what we did to gain control over an illness, with a less than 3 % survival chance. Their minds remained closed. Everybody else was absolutely stunned, including those consultants open to holistic therapies. 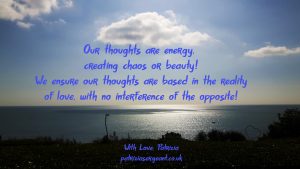 What I am trying to say with this story of acceptance and non-denial is that we can not expect to come out of a ‘haunting’ or ‘dreadful’ situation, possibly leading to a negative outcome, if we choose to close our eyes to the sheer facts staring us in the face. If we do, then we make ourselves weak by living in an illusion of what is not. Living in that illusion makes us vulnerable and powerless, allowing controlling forces, be it our own ego or that of people only interested in their own gain and power, to use us for their mind games, draining our energies for a future that is none.

Every time I tried to live in denial, I paid for it. Yet, if we truly care we will always somehow find a way out of a vicious circle, especially when we comprehend the potential of our own divine power to do so; being in the very present of reality of the now is key.

If we connect with all the courage we can possibly master and clear all the fear that leads us to blindness of the present moment now, clouded by a misleading belief that everything is not as it is, we can take every appropriate action to break out of the very downward leading spiral we got ourselves into. Denial is a dangerous endeavor, it actually leads to more fear, a deterioration of the situation and in the end capitulation.

The Universe can only assist and connect with us when we become very honest with ourselves and wish to see the facts with honesty and clarity. When we say; what have I done to get myself into this mess and what can I contribute to pull myself out of it to bring healing into this very situation, we will open those famous doors of all possibilities, allowing the most powerful healing forces to enter through our consciousness, lifting us out into the reality of ourselves. What we can say and do for our individual private improvement, we can also do for a global crisis.

Just like in my dad’s situation; we are all in this together, we must remain discerning and focus on the truth of the reality unfolding itself in front of us and then take appropriate steps to bring about healing into unhealthy situations! We are the root cause with our thoughtless actions. Turning a blind eye will make us and the world vulnerable and add to the destructive powers to those only working for their own gain, careless to our wonderful world. Imagine if we had always acted from integrity, appreciation, acceptance and non denial, from the power of love and the greatest care for our world, we would not be finding ourselves in a climate crisis or any political conflicts or wars.

We would in fact be having the time of our lives.

So far we have been kept in a state of mind control and numbness, it was easier to mislead us that way. Now we find ourselves at 5 to noon, the outcome is as clear as day if we continue moving in that state of denial.

When we take action we are empowered! This will diminish the ones walking and working from their own dark shadows, using us as their puppets!

Even when you are scared to death seeing reality as it is; go through that fear and do whatever you can to bring stability back to this world, which is now reflecting and showing the signs of centuries of unstable behaviour on a huge visible scale.

We do not know what the outcome will be but if we never try we will never know! 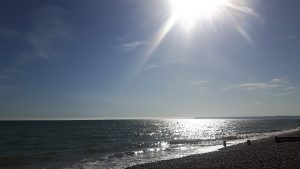